Three years ago, Dad was still with us and despite not being able to eat easily and being low on energy, he still participated in lent.  He liked ice cream a lot.  And so even though his cancer already prevented him from enjoying so many things he loved like gardening and jump roping, he gave up ice cream.

I remember Good Friday too.

Kevin and I had volunteered to stay with Dad so that Mom and the rest of the family could attend Good Friday service. And as we 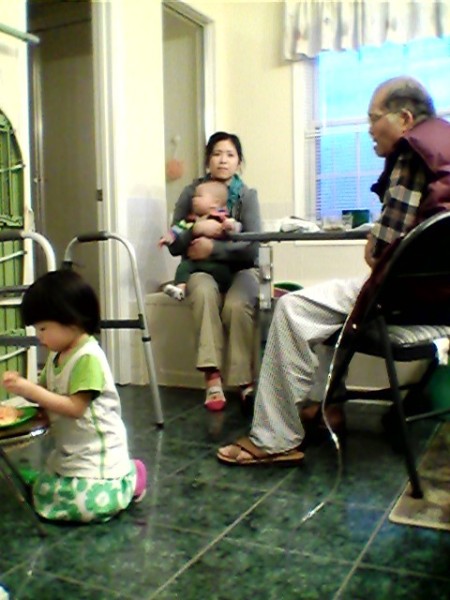 remembered Jesus’ death on the cross on Good Friday or in other countries they call it “Long Friday”, I didn’t know that Dad’s death would come only a week later.  As we were reminded of Jesus’ suffering, my dad was breathless, weak and his body was deteriorating. He never did get the chance to break lent. On earth that is.

Because he couldn’t make it down to the kitchen to eat, I sat on the tub in the bathroom area of my parent’s room, while Kevin and Maddie, who was three at the time pulled up a seat.  Baby Samuel was only seven months old.  And as Dad sat and attempted to eat his food ever so slowly, we sat with him.

On Easter Sunday, Dad really wanted to come to church.  For a typical person, you can pop out of bed, throw on some clothes and walk out the door, but going to church for Dad required so much energy….energy he did not have.  The act of changing required assistance and brushing his teeth and doing other activities of daily living were slow, not to mention they sucked the energy out of him.  As did taking steps to make it all the way out of the house.  And then to transfer into the car, and then out of the car. And then take steps slowly to make it to the door of the church.  His portable oxygen tank was with him and he would get anxious if he didn’t think there was oxygen to last him during his time out. It seemed like so much trouble.

But he wanted to go.

Church was his happy place, and so he went to church every week that it was possible.  On Easter Sunday, I remember sitting in the church foyer waiting and looking out for him to come.  Service had already started but that morning my brother-in-law who often helped Dad get ready told us it was taking a while. Dad was slower and when he finally made it to church, service was over.  Thankfully he was just in time for baptism which was two hours after service.

On days like Easter when we celebrate God’s power over death, something we cannot control, I remember Dad and man, I wish he were here.  Two of my little ones, including his namesake, were singing Sunday morning at service and I hope that from heaven, Dad could see their faces and hear their voices, as they joyfully proclaimed that Jesus is alive. Heaven is the better place, HANDS down, but on days like Easter, I wish Dad could have taken a day trip down or something.

With people missing, life just doesn’t seem the same sometimes.  On top of that, this world is quite a mess might I say. Things just aren’t right.  So this Easter in particular,  I remember that the God who has the power to raise Jesus from the dead and to save us from sins, also has the power to bring life to our dying circumstances to hopelessness, depression, chaos and all.    Praise the Lord for the hope he gives us today and forever.  I am so thankful.

Get some inspiration, insight, and fun into your mailbox.

Error: (#803) Some of the aliases you requested do not exist: aboutbeingold
Type: OAuthException
Code: 803
Please refer to our Error Message Reference.

Be in the know. Connect!